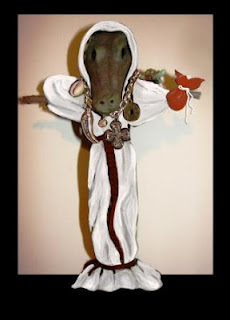 
Legend says that Uncle Monday refused to surrender to the whites, even though he said the spirits told him resistance was futile. But he swore he would never submit to slavery or death at the hands of whites and said he would change himself into an alligator until the wars were over. Then he would come forth from the waters in peace.


So the Seminoles held a ceremony for his transformation. As he danced to the drum beats, his legs began to become shorter and his face longer, his skin became scaly and his voice changed to thunder. He began to bellow, and in response hundreds of gators bellowed and came up from the swamp…thousands of gators actually, so the story goes. They lined up in two lines leaving a space between them.


Uncle Monday turned into the biggest gator of them all and he sauntered in between the two rows of gators and slid right into the water. As he let out the loudest bellow, all of the other gators slid into the water after him.
And that's how Uncle Monday changed himself into an alligator. They say he still lives in the swamps and every now and again he comes from the water and changes back into a man, walking among the living casting all sorts of spells—good and bad.


Now, there was this old lady name Judy Bronson, she went around bragging that Uncle Monday was no better a hoodoo doctor than she was. She said she could not only undo any spell he cast, but she could throw it right back at him.


Uncle Monday heard about her bragging and said "The foolishness of tongues is higher than mountains!"
One day, Judy wanted to go fishing at Blue Sink, which is the lake where Uncle Monday had been seen and was believed to live. Folks warned her about going there because they say Blue Sink is bottomless and a dangerous place. But, being the arrogant old lady she was, she insisted on going. So, she got to Blue Sink at sundown and tossed in her baited pole. No sooner did it hit the water than did she feel a pull on it. A BIG pull. So BIG she was scared as a cat in a dog pound and paralyzed with fear.


Old Judy's biggest fears were the dark and the water—and there she was at sundown, near the water, being pulled in by a force she couldn’t resist. She couldn't move - her legs were frozen. Somehow she found the strength to scream and as she did, a bright beam of light shone upon her. At this point, you may think that the light helped others find her and rescue her…BUT… No such luck.


Old Judy looked up and as she did, she saw Uncle Monday walking across the water like Jesus, dressed in flowing robes and marching right towards her with an army of gators behind him. He walked up to her and said "I brought you here, and here you will stay until you get off your high horse and admit that you can't do no such magic as me."


Soon, the light faded and it was black as night. Uncle Monday and his army of gators slid back into the water, leaving one gator behind to stand guard with Judy. He edged right up to her so she could feel his scaly skin. She couldn't help but touch him with every breath she took.


As soon as she said it out loud, the gator that was on guard quickly swam off into the darkness and that’s when Old Judy heard her grandma calling for her. Within a few minutes, some of the locals found her and lifted her out of the water and carried her home. The people tried to tell her that she fell and had a stroke; but, Old Judy, she knew differently, of course.


Well, after that swamp scrape Old Judy threw away all of her Voodoo and hoodoo stuff. From them on she said she had Uncle Monday to thank for being able to walk again.


Uncle Monday still walks through the countryside as a man, but he always changes back to a gator and swims in the waters, keeping an eye on things, especially arrogant folks.


When he goes back into the waters, all of the other gators start to bellowing and carrying on... and when the people hear that, they know Uncle Monday has returned to the waters and they can breathe a sigh of relief again.

Denise Alvarado www.planetvoodoo.com, www.crossroadsuniversity.com, published author, Educated, artist, internet. I`ll endeavor to remove any and all negative comments I`ve made about her and her businesses or work. The truth is that I do admire Denise`s artistic talents, and I`ve always found her to be an intelligent and congenial person. I do not want to feel this kind of anger or pain any longer, and I don`t want to block Denise`s ability to make a living. And so I would urge others to go ahead and order from her. I regret this whole experience and I will do whatever I can to heal the hurt of it.