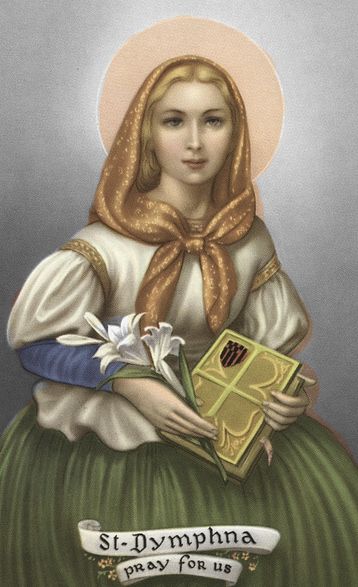 St. Dymphna is the patron saint of incest survivors, runaways and people with mental disorders. She was the daughter of a pagan Irish king and his Christian wife in the 7th century AD. She was murdered by her father for refusing to marry him after her mother died. She was only 15 years old when she was killed.

St. Dymphna is sometimes called Lily of Fire in reference to her purity and glorious martyrdom. It is said that at a very young age she consecrated her virginity to Jesus Christ and to his Blessed Mother with a vow of chastity.

All of the stories I have read about the unfortunate and tragic plight of this young girl explain her father’s advances on the fact that he was grieving the loss of his wife. As far as I know, grief has never been a precursor or cause of incest and rape. These conditions have much more to do with power and serious psychological problems of the perpetrator. It does no one any good to attempt to turn her story into some sort of tragic fairytale or a glorious story of Christian martyrdom. It was no fairytale—she obviously lived in extreme fear and likely suffered from post-traumatic stress disorder. Before she was brutally murdered, a priest, Father Gerebran, did everything he could to keep her safe by helping her flee her country. One would think that would be the end of it and her father would move on to someone else but he was so obsessed with marrying his daughter that he tracked her down in a little village called Gheel in Belgium. Her father, along with his companion brutes, confronted her and Father Gerebran who defended Dymphna and refused her father access to his daughter. This only enraged the king who then ordered the priest murdered, a task eagerly carried out by his thuggish minions who promptly beheaded the priest.

Dymphna’s father continued to intimidate her and attempt to force her to return to Ireland with him as his wife. When she continued to refuse his perverted advances, he once again became enraged and took his own sword out of his belt and beheaded her on the spot. At the age of 15, on the 15th of May sometime between 620 and 640, she became a martyr.

As the story goes, the bodies of the two martyrs, Father Gerebran and Dymphna, lay at the spot where they were murdered for quite awhile until some of the locals found them and moved them to a cave as was their custom. After a few years, folks decided that given the circumstances of their deaths and statuses as martyrs, Father Gerebran and Dymphna deserved a better burial. So, they set out to disinter them and move them elsewhere. When the earth covering the entrance to the cave where they were buried was removed, the workers were surprised to find two clean, white tombs seemingly carved by angels. When the tomb of Dymphna was opened, There was a red tile laying on her breast that read:

Dymphna’s remains were placed in a small church. Later, the magnificent Church of St. Dymphna was built on the site where the bodies were first buried. There, St. Dymphna's relics are kept in a golden reliquary. Miracles and cures began to occur in continually increasing numbers at her shrine. St. Dymphna became known as patroness of victims of nervous diseases and mental disorders. The stories of miracles spread from country to country. An increasing number of people with psychological and emotional problems made the pilgrimage to her shrine with hopes of healing. Novenas were made, and St. Dymphna's relic was applied to the patients. Reports of remarkable cures continued to spread throughout the land and more and more people came to believe in her healing powers. In the beginning, the people who came for healing were put up in a little building that was built onto the church. Later, there were so many people coming that the people in the village of Gheel opened their homes to them. As a result, Gheel was renowned for its care of the insane and mentally afflicted.

To work with St. Dymphna, dedicate a sacred space to her. Place her image and anything that helps you feel emotionally and psychologically balanced in that space. This can be special rocks, a crucifix, rosary, flowers, etc. These things need not be Catholic—the important thing is that they bring you comfort within your own belief system. St. Dymphna is often depicted with a sword which represents her martyrdom so you could place a sword on her altar. She is also depicted with lilies which represent her as female, a blue book and a little green devil representing insanity.

Get a white or green 7-day glass encased candle and anoint with Lilly of the Valley and Clarity oils. Write a petition stating your needs on parchment paper and place under the candle. Light the candle and say a devotional to her each day. You can use the following prayer:

Hear us, O God, Our Savior, as we honor St. Dymphna, patroness
of those afflicted with mental and emotional illness.
Help us to be inspired by her example and comforted by her
merciful help. Amen.

After the prayer, you should speak to her from the heart letting her know that you need her help. A variation of this work would be to get a picture of a devil, color it green and name it for the affliction you wish to remove or heal. Place that image face down under the candle and proceed as above. Once the candle burns to the bottom but has not yet extinguished, take the image of the devil and burn it in the flame of the candle. Then allow the candle to burn out. Take the candle to a cemetery and bury it there to symbolize the death, burial and/or transformation of your affliction.