Welcome to the World of St. Expedite 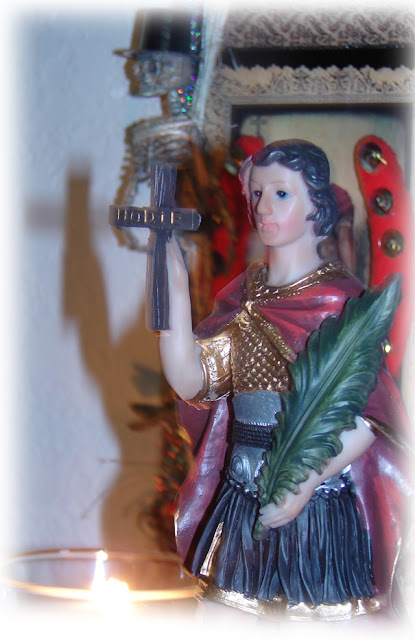 Welcome to a world of wordplay, puns, mystery, and legends, from the year 303 to the present, from Italy to France, Argentina, Brazil, Chile, the Philippines and finally, New Orleans, Louisiana. Welcome to the cult of devotion for the Minute Saint, whose past obscurity is replaced in special circles with near celebrity. Welcome to the world of St. Expedite.
He’s on the fringe of Catholicism, the “black sheep” of the saintly family; though, not through any fault of his own. Even as he is accused of being a novelty, a joke, and a mistake, even as he has suffered decanonization by the pope and decapitation by tempestuous followers, St. Expedite continues to work his miracles with expediency, unlike any other saint. He is loyal to his devotees and they are loyal to him. He dispenses faith, hope and charity along with prosperity, work, and justice all in one tight little bundle, wherever and however you need it. And, he will help near about anyone. Catholics, nonCatholics, pagans, rootworkers, Haitian Vodouisants and New Orleans Voudouists—really, anyone who petitions him with a sincere heart and the promise of a piece of pound cake (Sara Lee, preferably), he will come to their aid. Just be sure to let the world know how great he is when he comes through for you—that’s about the only caveat.


When I first set out to write this book, I had no idea it would be as long as it is. One hundred and forty pages or so may not seem like a lot; but, for a saint who is best known for how little is known about him, it shows what a little digging can do. This book does not end my quest for learning all there is to know about this saint, however. That said, this book is the first and only book about St. Expedite that combines all the common knowledge with the uncommon knowledge, along with some of the mysteries of his presence in New Orleans Voudou, his relationship to Mardi Gras, Baron Samedi, and sorcery. I include an examination of entries about him in the Hyatt texts, as well as practical conjures of my own. All of the prayers you will ever need are contained within these pages—some of them are common Catholic prayers while others are prayers I have written using familiar Catholic format and verbiage. In short, this book contains everything a person needs to know about St. Expedite and how to serve him as a patron saint by anyone who cares to do so.
I looked high and low to find information on St. Expedite for this book. My thought is that everyone has a history, we just need to look until we find it. The task proved to be greater than I realized because there truly isn't a lot written about him, at least not in English. The French sure love this guy, however. Don’t dare attempt to tell them he is some sort of hoax. Because when the French endear themselves to someone as much as they do St. Expedite, trying to relegate him to status of urban legend in the presence of a die hard French devotee will leave you feeling like un parfait imbécile (a complete idiot)!
But, it’s not just the French who love St. Expedite. He is loved around the world and New Orleans is no exception. He is considered the patron saint of New Orleans by many, and the patron saint of New Orleans Voudou by many more. Where he is shunned by Roman Catholics, he is embraced by New Orleans Voudouists. He has a healthy following of those who appreciate folk Catholicism and a growing following of rootworkers. Despite being kicked off of the official martyrologies, downplayed on the Our Lady of Guadalupe Chapel website, ignored by devout Catholics and made fun of by Catholic priests, his cult of devotion remains strong. Try as they might, this saint’s not going anywhere—fast.
So, grab yourself a cup of coffee and chicory, or a glass of sweet tea if you prefer, put on something comfy and enjoy this labor of love I have created in perpetual homage to the Minute Saint. Glory be to St. Espidee!

Working with St. Anthony of Padua 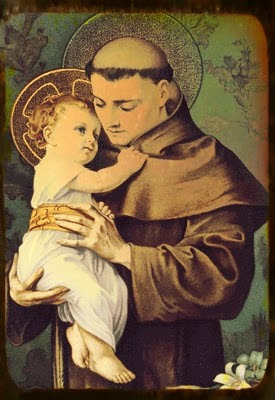 St. Anthony of Padua is one of the Catholic Church’s most popular saints, as well as one of New Orleans’ most popular saints. He was a powerful Franciscan preacher and teacher and is widely recognized as a miracle worker.  He is usually depicted holding a lily, a book and/or the baby Jesus in his arms.  Nearly everywhere, St. Anthony is asked to intercede with God for the return of things lost or stolen. Those who feel very familiar with him may pray, "Tony, Tony, turn around. Something's lost and must be found."

Saint Anthony of Padua lived from 1195 until 1231 AD. His feast day is June 13, which is the anniversary of his death. His color is brown and because he was buried on a Tuesday and many miracles occurred at that time, Tuesday is his celebrated day. It is customary to pray a Novena to him on thirteen consecutive Tuesdays.

In New Orleans, it is said that Marie Laveaux always kept a statue of St. Anthony in her front yard and when she was “doing a work” she would turn the statue upside down. The upside down position of the statue of St. Anthony let people know she should not be disturbed at that point in time. When she was done with her work, she would turn him right side up again and availed herself to visitors.

St. Anthony is well known for his numerous miracles. His most famous miracle could well be his sermon to the fishes. When a crowd refused to listen to him, he apparently turned his back on them and standing on the shore, began preaching to the fish in the lake. It is said that the fish responded by lifting up their heads from the water so they could hear him better. This event no doubt caught people’s attention.

In some countries, Saint Anthony is prayed to by travelers and vacationers for a safe journey, particularly over the seas. Thus, he is the patron saint of sailors and fisherman in Spain, Italy, France and Portugal. According to some stories, sailors keep a statue of Saint Anthony on the mast of the ship, and appeal to him for safety while at sea.

St. Anthony is traditionally invoked for help with finding lost things because of an incident that occurred in his own life. According to legend, Anthony had a book of psalms (Psalter) that was very important to him. The Psalter had the notes and comments he had made to use in teaching students in his Franciscan Order. A novice who had grown tired of living a religious life decided to leave the community. In addition to going AWOL, he took Anthony's Psalter! When Anthony realized his Psalter was missing, he prayed for its safe return. Soon after Anthony's prayer, the thief felt compelled to return the Psalter to Anthony, as well as return to the Order which accepted him back.

Oral tradition has a much more colorful version of this story. In this version, the novice was stopped in his tracks by a ghastly devil wielding an ax and threatening to crush him if he did not return the book immediately. According to AmericanCatholic.org, “in Christian tradition a devil would hardly command anyone to do something good. But the core of the story would seem to be true. And the stolen book is said to be preserved in the Franciscan friary in Bologna.”

St Anthony is best known among conjurers as the patron of lost things, as well. He is invoked when a person is lost. Many people call upon him to help them reconcile with a lost lover and to help find a mate. Because Saint Anthony finds lost people, his aid can also be requested when praying for someone who is severely struggling, and who seems to be a lost soul. Call his name, visualize your lost item and explain to him how important it is for you to find it, and sincerely ask for his aid. You will find your missing object, especially when reciting the following prayer.

Prayer to Find What Is Lost