A teacher posted a mean note on the bulletin board outside of the school office aimed at a failed student and texted the same note along with a photo to whom the note was written to all the students in the school. The teacher also posted it on a public forum on the internet for the world to see. This teacher was surrounded by a group of mostly silent supporters, more accurately described as “followers” in that they did not question the teachers’ motive or actions. Upon discovery, the children and other teachers seemed shocked and offended (except the few who sent the note) evidenced by mouths agape, gasping, posturing and sudden and persistent incessant chatter about the incident on the school grounds.

The target of the hateful letter told the principle and teacher. They told all of their friends what happened. Many of the other students and teachers rallied around the victim, but only a handful of them dared speak openly about it, for fear they would be the next target, evidenced by statements to that effect in personal and public conversations. When confronted with the behavior, the teacher blamed the victim for causing their reaction that prompted the writing of the letter and public posting of same.

On the same day as Incident #1, a teacher wrote an assignment for a class that was directly in opposition of the school mandated curriculum. When the other teachers became aware, many became angry, evidenced by loud voices and arguing and declaring war on the opposition, others were glad, evidenced by smiling, and patting each other on the back. A third group questioned the mandated curriculum and the agenda behind the school for choosing said mandated curriculum. These individuals exhibited furrowed brows and asked questions not normally asked, such as “why?” and “how?” This small group appeared to agitate both of the other groups as their questions were met with sarcastic comments, condescension, and were told to stop creating conflict (in essence, told to be quiet). It is significant to note that this third group did not acquiesce to the demands of the other groups and maintained their stance, questioning the status quo.

Another student was angry at someone else for cheating on a test. This student decided to emulate the first scenario exhibited by the teacher and send their own hate-filled letter, posting it on the same bulletin board for the whole school to see, as well as on a similar forum on the internet where it became visible to the general public. This student belonged to the same group as the second group in Incident #2. When confronted by individuals belonging to group 3 (incident #2), this student became angry and defensive, evidenced by the tone of their voice and the words spoken (i.e. “step off,” “you wouldn’t understand,” “stop causing trouble”). This student claimed to be “bullied” when it was pointed out to them (by members of group 3 in Incident #2) that their behavior mirrored the behavior of the first scenario.

Conflict resolution does not appear to be a strength amongst the individuals observed. As is often the case with adolescents, they are impressionable and tend emulate the behaviors of those they look up to, even if the behavior is self-destructive. According to Erikson's stages of psychosocial development, it appears many among the observed groups are emotionally stunted at most, and emotionally regressed at least, across the board. The age group spans several generations, beginning with teenagers who normally experience what Erikson coins "identity vs role confusion," to older adults whose normal psychological development is at a stage called "ego integrity vs despair." The identity vs role confusion stage is characterized by a normal struggle with the individual figuring out a sense of personal identity, who they are and what they stand for. When this is accomplished, they feel success, a sense of accomplishment, and are able to stand up for what they believe in, even if the peer group is engaging in oppositional behavior. When they are unsuccessful, it results in a poor sense of self, a lack of self-worth and a lack of personal identity. 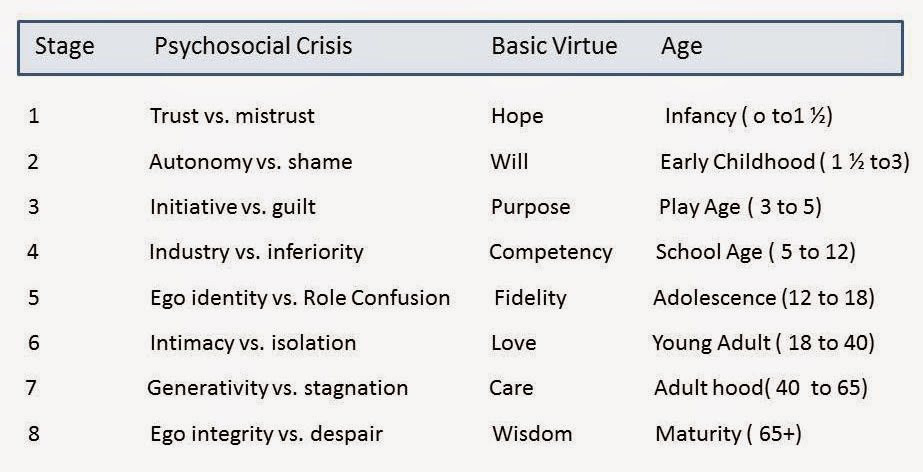 The teachers in the above scenarios are from middle adulthood in the stage Erikson coins “Generative vs Stagnation.”  At this stage in life, the well-adjusted adult seeks to engage in activities that will leave a legacy, something that will represent their deeds in life. They nurture and create things that will outlast them often for the benefit of others. When successful, they experience a sense of accomplishment and usefulness. When unsuccessful, they experience nothing more than feeling stuck and a shallow involvement with the world.

The oldest members in the above scenarios belong to the stage Erikson calls “Ego Integrity vs Despair.” There is an inherent human need to be able to reflect back on life and feel as if they made a difference and to feel fulfilled with their lives. To be successful is to feel wise; to be unsuccessful is to feel regret, bitterness and despair.

According to Erikson’s theory, when individuals do not develop within normal psychological parameters, crisis occurs.

With the exception of group three as described in Incident #2, the group as a whole appears to display various forms of ego regression. According to Freud’s psychoanalytic theory, ego regression, which is a form of coping defense mechanism, occurs when faced with a threat to one’s personal sense of self or schema. The anxiety that results is too great to bear psychologically and emotionally. Therefore, the mind being the wonderful thing that it is, unconsciously brings into play a variety of strategies aimed at lessening and eliminating the anxiety. Some of these defense mechanisms include manipulation (i.e. sending letters, using public display as humiliation, intimidation and fear tactics; garnering peer group sympathy), rationalization (blaming someone else for one’s behavior; feeling justified to attack another because they cheated on a test;  minimizing the severity of their behavior), distorting reality (i.e. taking on the role of “victim” instead of taking responsibility as perpetrator; telling lies), expressing anger as the motivation for one’s actions, and denial, which isn’t a river in Egypt.

In the context of Erikson’s Theory of Psychosocial Development, we see regression going back to infantile and toddler emotional and psychological stages of trust vs mistrust and autonomy vs shame and doubt. Is there consistent care by the school (archetypal Mother)? Are students adequately self-sufficient to survive betrayal of trust? And as to the psychological developmental stage of the 3 to 6 year old, initiative vs guilt; are students able to overstep the boundaries of the Mother without feeling guilty? Can they, and are they willing to, stand on their own two feet, express their own opinions without fear of reprisal?

Psychological defense mechanisms are part of a healthy psyche. We all have them, and we all use them thank Buddha. They only become pathological when used persistently to such a degree that they have an adverse effect on one’s mental health.

In addition to the above observations, there also appears to be an element of antisocial behavior amongst some of the subjects. I’ll let the reader decide whether this rings true for them or not. But, just for shits and giggles, here are 16 characteristics of sociopathy described by Cleckley (1941) as cited in Thomas (2013):


In many aspects, both groups 1 & 2 resemble a dysfunctional family unit with group members taking on roles of parents and children, brothers and sisters. Take a look at the top image and the chart below to get an idea of what I am referring to. These roles develop within alcoholic and abusive family systems.

In all three observed scenarios, the pink elephant in the living room has yet to be acknowledged and agreed upon between all members of the groups. Unfortunately, this will likely leave them divided as individuals as well as amongst themselves. Group three will continue normal psychosocial development, while groups 1 and 2 will likely continue to deteriorate psychically, emotionally and communally until they accept personal responsibility for their role in keeping the pink elephant hidden in plain sight.