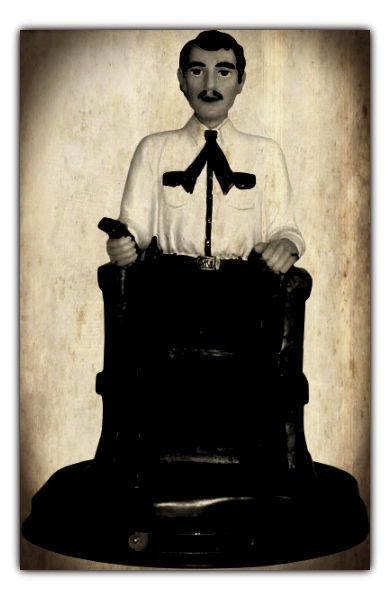 DEPENDING ON WHO you talk to, Jesús Malverde is either the “Mexican Robin Hood” and “Angel to the Poor,” or the “Narco-Saint” and Protector of drug traffickers. His intercession is sought by those with problems of all kinds and it is said miraculous healings and blessings have been attributed to him. Offerings are made to him along with photos of individuals in need of help, and when requests are granted, he is thanked and a public recognition is made commemorating the miracle.
The stories about Malverde and the culture in which he originated is actually quite fascinating. The legend of Malverde begins during an era of much poverty and suffering in Mexico, referred to as the Porfiriato.  Under the reign of a dictator named Porfirio Diaz (1877-1911), Mexico was being modernized by big business at the expense of the majority of the population who - not included in any beneficial way in Porfirio’s modernization efforts - remained in extreme poverty. Watching progress pass them by left impoverished Mexicans brewing in social unrest, and as a result, the countryside became littered with bandits. Here, in this context, the bandits aren’t the bad guys; they are the ones standing up to a neglectful government and fighting social injustice for the poor. Eventually, this social climate led to the Mexican Revolution, and many of these bandits rose to the status of folk hero.
Jesús Malverde was one such bandit who rose to the status of folk hero, and later to the status of folk saint. Born Jesus Juarez Mazo sometime in 1870 near the town of Mocorito, Malverde is believed to have been either a tailor, a construction worker or a railway worker.  He reportedly rode the hills near Culiacan  Mexico during the Porfiriato stealing from the rich and giving to the poor. These deeds are why he earned the name Mexican Robin Hood. Unfortunately, his unorthodox humanitarian efforts were not appreciated by the Mexican government, and he was eventually caught and hung from a tree on May 3rd, 1909, his body left to rot. This is the origin of his feast day, and every year  at this time there is a great celebration at his shrine, which is located near the railroad tracks on the west side of Culiacan, and is well-known to just about everybody in town (Quinones, 2001).
This is but one version of his legend—there are many others. According to Quinones (2001), “Some say Malverde began a life of crime after his parents died of hunger. Some versions say he was finally betrayed by a friend, who cut off his feet and dragged him through the hills to the police to collect a 10,000 peso reward. Others have him betrayed and shot to death. His betrayer dies three days later, and the governor who wanted him, Francisco Canedo, dies 33 days later, from a cold contracted after going out at night without slippers.”
Malverde’s first miracle is said to have occurred shortly after his death, while his bones were left hanging in the Mesquite tree  as a deterrent to other potential outlaws.  It was a friend of his, legend says, that went to Malverde’s hanging bones to ask his dead friend to help him locate two mules laden with silver and gold that he had lost. He ended up finding them, and so in gratitude, he gathered Malverde’s bones and took them to the cemetery where he bribed the guard for permission bury Malverde there. The friend buried him in a secret location in the cemetery, just as if he were burying smuggled goods. No one knows exactly where he was laid to rest, nor is it likely anyone will ever find out.
Whatever the story, there is, without a doubt, quite a bit of mystery surrounding this folk saint. He is angel to some, evil to others. Especially in recent years, when the only time one hears his name is in the papers and it is always associated with drug trafficking of some kind. Statues of Jesús Malverde are believed to keep drug dealers' stash invisible to cops, so cops look for the statue and if there are drugs close by, that is where they will likely be.  But, it appears that his image as Narco-Saint is a relatively recent phenomenon as compared to his original, more philanthropic reputation.
I had to ask, when did Malverde change in image from Robin Hood to Narco-Saint? And, how did this happen?
Culiacan, the capitol of the state of Sinaloa, is the cradle of the Mexican drug trade, and this is the region where Malverde carried out his illegal activities. He had been served as a folk saint there since his death in 1909 and so it was not a leap for drug dealers to turn to him for protection and success in their activities. Drug dealing is a thriving economy engaged in by the disadvantaged in response to a lack of any other possibilities for relief from poverty. When a smuggling across the borders is successful, Malverde is thanked for “Lighting the way.”
However, it was during the 1970s that Sinaloa was targeted and entrapped in the military operation known as Operation Condor. The military declared war against the region's drug smugglers and the army went through the hills attacking drug smugglers and innocent ranchers alike. The state lost an estimated 2,000 hamlets and villages during those years as people abandoned homes, land and livestock and streamed from the hills to the cities (Quinones, 2001). "The press, sharing the same view as the authorities, or perhaps so as not to be left behind when the graft was being handed out, added their two cents," says Luis Astorga, a researcher of the narcoculture who lived in Culiacan during this time. "They labeled Malverde as the ´Narcosaint.' The drug smugglers, due to their social origin, had inherited the belief in Malverde. But the media gave it a kind of yellow slant. They were really the ones who made Malverde into the drug smuggler's saint, forgetting how old the belief in him really was"  (Quinones, 2001).

Working with Jesús  Malverde is really very simple, as is the case with most folk saints. Devotees talk to him regularly, develop a relationship with him, and bless themselves whenever they walk past his image. They wear Jesús Malverde perfume oil when calling upon him for help, guidance and protection. Images of Malverde and his prayer are hung behind the front door as a talisman to protect a place or are carried upon a person for protection and to keep the law away.
Often, shrines of Malverde include statues of Santa Muerte, as well as Our Lady of Guadalupe. Malverde himself is typically represented as a large bust in public shrines and as a smaller statue on personal shrines. But, since he is patron to the poor, your altar need not be fancy. If all you can do is print out his image, then tack it to the wall above a small table or dresser top and you will be fine. If you can’t afford fresh flowers, use plastic.  If you can’t afford colored candles, plain white ones will do.
Two candles are needed to petition Jesús Malverde: one, a glass encased Jesús Malverde seven color candle and the other, a glass encased three color Jesús Malverde candle. Some folks will use a white Santa Muerte candle and a green Jesús Malverde candle. Set an altar with the two candles on either side of his image, and place a photo of the person needing assistance on the altar. Set a written petition that has been placed in an envelope next to his image. If you have a bust or statue of him, place your hand on his head while praying. You may pray the following prayer:

Dear Holy and Miraculous Malverde, I kneel before you today and ask for your mercy to heal my pain. You, who dwells in the glory of God Almighty, I come to you as a humble sinner asking you to hear my pleas for freedom from suffering. Oh miraculous Malverde,  grant me this favor and fill my soul with joy. Give me health, give me rest, Make me well and I will be happy. This is what I ask of you Malverde, to grant this favor. If you do this for me, I promise I will make an offering to you and make a charitable donation to the poor. (Concentrate on your desires) Amen.

The prayer can be altered to fit your need; as it stands, it is a prayer for healing. Offerings to Malverde run the gamut from candles, trinkets, corn cobs, photo collages, music and flowers to artificial limbs reminiscent of St. Roche in New Orleans.