To Fire Up or Not to Fire Up, That is the Question 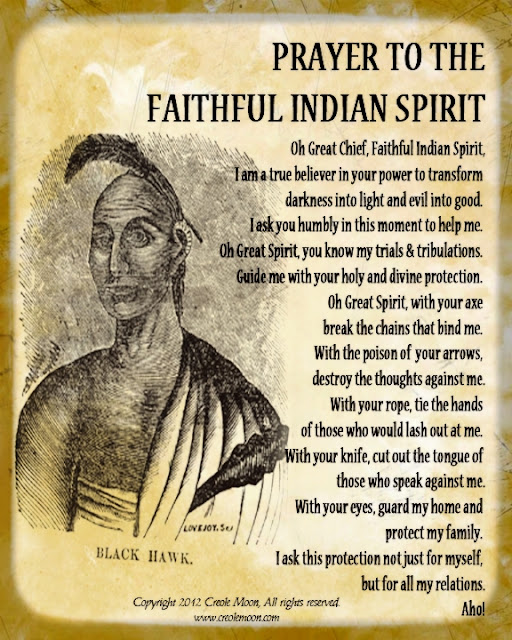 Working with Indian Spirit Guides is an ancestral tradition more than anything else. As such, respect for our ancestors is paramount. This means listening to them, not only in our hearts, but also with our minds and our eyes. We are lucky to have the words of Black Hawk, Red Cloud, Sitting Bull, Geronimo and others transcribed in written form and preserved for us to draw from and learn. They tell us who they are and what they like—we don't have to guess. For example, the popular practice of giving Black Hawk alcohol to “fire him up” is completely contrary to both Native American spiritual traditions, as well as Black Hawk’s belief system (not to mention horribly stereotypical). He tells us how much he hated alcohol because of what it did (and continues to do) to his people. Consider the following passages from his biography where Black Hawk states in no uncertain terms exactly how he feels about alcohol:

“Why did the Great Spirit ever send the whites to this island to drive us from our homes and introduce among us poisonous liquors, disease and death?”


”I found several barrels of whiskey on the captured boat, knocked in the heads and emptied the bad medicine into the river.”


“Our people got more liquor from the small traders than customary. I used all my influence to prevent drunkenness, but without effect. As the settlements progressed towards us, we became worse off and unhappy.”


Perhaps, this passage from his autobiography is the best example for not offering Black Hawk alcohol:


"The white people brought whiskey to our village, made our people drink, and cheated them out of their homes, guns and traps. This fraudulent system was carried to such an extent that I anticipated serious difficulties might occur, unless a stop was put to it. Consequently I visited all the whites and begged them not to sell my people whiskey. One of them continued the practice openly; I took a party of my young men, went to his house, took out his barrel, broke in the head and poured out the whiskey. I did this for fear some of the whites might get killed by my people when they were drunk."

So, in the above passage, he refers to those who brought the alcohol as fraudulent. Knowing how strongly he felt about alcohol, why would we give it to him? Do you want to be a fraud in his eyes? He doesn’t want it and he doesn’t need it. In fact, it is likely to piss him right off and not fight for you at all; but, fight against you. He is a warrior spirit—warriors do not need alcohol to fight their battles. While giving spirits alcohol as an offering is commonplace in Hoodoo, it is not a blanket practice. Not everyone gets rum and whiskey. So the inevitable argument that alcohol is an appropriate offering to Black Hawk in the conjure tradition is an irresponsible and disrespectful excuse on the part of the rootworker, especially in the context of ancestor reverence.