St. Nicolas the Wonderworker and Reanimator of Corpses 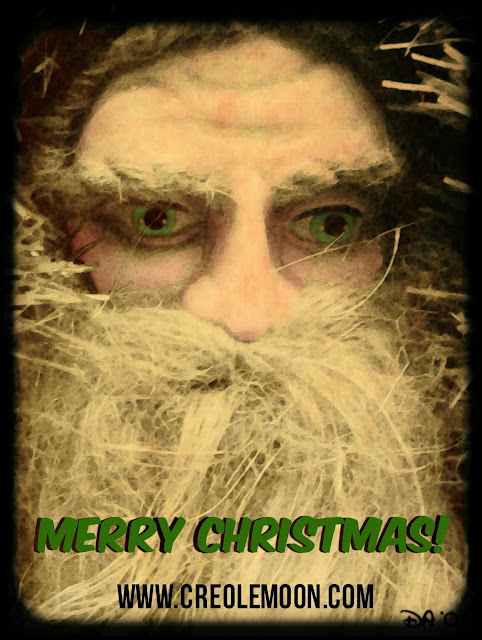 IT sounds like a nightmare straight out of American Horror Story, and certainly not what we would typically imagine when thinking of jolly ole St. Nick. It was during a time of great famine, and the people were hungry—so hungry, in fact, that some resorted to the most desperate of actions in order to quell their hunger pangs. For example, one person—a butcher—lured three innocent children into his shop, proceeded to chop them up and began preparations for selling them as packaged meat. But first, the bodies had to be placed in brine and cured.  Nicolas was in the area at the time, busy doing what he usually does, caring for the less fortunate and feeding the hungry. He realized what had happened when he saw the butchered bodies of the three children curing in barrels.. Horrified and determined to right the wrong, Nicolas performed his first miracle by resurrecting the three children from the barrels through his powerful prayers. Needless to say, the butcher was on the naughty list that year.
In a different version of this story, the slaughtered victims were three clerks as opposed to children. The three clerks needed a place to stay the evening and asked to spend the night at the butcher’s home. He agreed, and then promptly murdered all three. The butcher’s wife—clearly a sociopath—suggested her husband turn the dead bodies into meat pies. Nicolas saw through this evil crime and through his powerful prayers, brought the men back to life.


As with any legend, there are naysayers who do not believe either of the aforementioned stories. To them, the story of St. Nicolas’s ability to raise the dead is considered absurd and can be attributed to a simple matter of mistaken identity. The real story, according to the doubting Thomases, begins with a man with three daughters who were unable to find husbands because they were dirt poor. The man’s solution to the problem was to turn out his daughters to the streets and into a life of prostitution. Now, St. Nicolas’s parents died when he was a young boy and as his folks were well off, he inherited an obscene amount of money with which he pledged to utilize for charitable work. He took the opportunity with the man and his three daughters to act upon his pledge.
St. Nicolas, however, was a very humble person and was not into doing charitable work for public recognition. So, true to his reputation of performing acts of kindness on the downlow, he took a bag of gold coins and tossed it into a window of the man’s home in the dead of night so he couldn't be seen. There was enough money for a nice dowry for the eldest daughter, and she was married soon thereafter. St. Nicolas did the same thing for the second and third daughters, all of whom were subsequently married. During his third attempt, however, the man actually saw St. Nicolas toss the bag of gold into the window. Now, the man was able to express his deep gratitude to St. Nicolas for the kindness he had shown his family.
And, this is the part of the story where the mistaken identity comes into play. Paintings and artistic renderings of St. Nicolas and his iconography sometimes feature three bags of gold. According to this explanation, the three bags of gold have been mistaken for the heads of three children, giving rise to the murder by dismemberment tale. Personally, I’m not sure which of the stories are more absurd, raising the dead and reassembling chopped up bodies or mistaking three bags of gold for the heads of three children. In my opinion, the latter seems as much of a stretch as the reanimation story. But whose to say? It is supposed to be a miracle, after all.
Whatever may be the case, it is not putting dismembered bodies back together, fighting cannibalism, or reanimating corpses that put St. Nicolas on the world map. Before he was a saint, Nicolas (270 – 6 December 343) was well-known for his generosity and gift giving. It is said he would secretly put coins in the shoes of those who left them out for him, and he would routinely help the hungry and the needy. He was a true philanthropist. Because of his generous nature and penchant for giving gifts, he became the role model for the modern day Santa Claus.
Indeed, St. Nicolas is arguably the most popular saint in all the world—second only to the Virgin Mary. He is known by different names depending on the country and region in which he is venerated. Santa Claus, Saint Nicholas, Father Christmas, Sinterklaas, Kris Kringle, Odin the Wanderer, Jule Nisse and Jouluppukki, are but a few names he goes by.  In Louisiana, he is known as Papa Noel.

As with most legendary characters of New Orleans, Papa Noel is surrounded by a fog of mystery and myth. He doesn't own a sleigh as it wouldn't be practical traversing the swamps and bayous of Louisiana, and he has no need of reindeer because it is said the Creole food would make them too fat to fly. Instead he moves about in a pirogue, a narrow, flat-bottomed boat that can penetrate the deepest swamp. Some say he has 8 fat alligators and a red-nosed loup garou to pull his pirogue. Others say no, the alligators are just close friends, the loup garou is a distant cousin, and it's Papa Noel who has the red nose (he is particularly fond of Ponche au Lait - Creole Milk Punch, reindeer beer and crawdads). The bon fires are lit all down the levees to help guide Papa Noel to the children in the area.

Dissolve the sugar in the Brandy or Whiskey. Pour chilled milk into a glass about halfway to three quarters of the way full. Pour the sweetened Brandy or Whiskey over the milk and add crushed ice. Put on St. Nicolas’s altar for him to enjoy.

Read more about St. Nicolas including recipes and working with him from a conjure perspective in Gumbo Ya Ya #4.

And now a little lagniappe...

Twas the night before Christmas an' all t'ru de house,
Dey don't a ting pass Not even a mouse.
De chirren been nezzle good snug on de flo',
An' Mama pass de pepper t'ru de crack on de do'.

De Mama in de fireplace done roas' up de ham,
Stir up de gumbo an' make de bake yam.
Den out on de by-you dey got such a clatter,
Make soun' like old Boudreau done fall off his ladder.

Cuz dere on de by-you w'en I stretch ma'neck stiff,
Dere's eight alligator a pullin' de skiff.
An' a little fat drover wit' a long pole-ing stick,
I know r'at away got to be ole St.Nick.

He got on his foots an' jump like a cat
Out to de flo' where he lan' wit' a SPLAT!
He was dress in muskrat from his head to his foot,
An' his clothes is all dirty wit' ashes an' soot.

A sack full o' playt'ing he t'row on his back,
He look like a burglar an' dass fo' a fack.
His eyes how dey shine his dimple, how merry!
Maybe he been drink de wine from de blackberry.

His cheek was like a rose his nose a cherry,
On secon' t'ought maybe he lap up de sherry.
Wit' snow-white chin whisker an' quiverin' belly,
He shook w'en he laugh like de stromberry jelly!

But a wink in his eye an' a shook o' his head,
Make my confidence dat I don't got to be scared.
He don' do no talkin' gone strit to hi work,
Put a playt'ing in sock an' den turn wit' a jerk.

So he run out de do' an, he clim' to de roof,
He ain' no fool, him for to make one more goof.
He jump in his skiff an' crack his big whip,
De' gator move down, An don' make one slip.

An' I hear him shout loud as a splashin' he go,
"Merry Christmas to all 'til I saw you some mo'!"

From  "Cajun Night before Chrismas"