Cute Puppies and Sons of Bitches


So, many of you know of the falling out between myself and my former business partner earlier this year which I have laid to rest a long time ago. I have refrained from publicly assassinating her as she did me, and only wish her well. After all, I have way too many things going on to focus on nurturing negativity. And that god awful rip off report full of lies, well she did issue somewhat of an apology and indicated she would like the initial report she made removed. Unfortunately most people don't read through the entire dissertation of a report...but if you did, you would find this at the end of it all:


But in the end, this is all too mean-spirited for me, it`s not at all descriptive of what I`m really like. That`s why I`ll endeavor to remove any and all negative comments I`ve made about her and her businesses or work. The truth is that I do admire Denise`s artistic talents, and I`ve always found her to be an intelligent and congenial person. I do not want to feel this kind of anger or pain any longer, and I don`t want to block Denise`s ability to make a living. And so I would urge others to go ahead and order from her.

Truth is, that site is a scam in and of itself. The only way you can have reports removed is if you pay the owner $2000.00 and even then all they do is "amend" the report, so it stays there. I don't know how they get away with it. The site may have some legitimate complaints, but there has been an alarming trend of people using it to air dirty laundry between personal relationships, as a means for getting even with an enemy or simply used as a means to discredit someone for whom they have a chip on their shoulder.

Take this recent report, for example, written by one transparent little man under the name  "New Orleans Internet" about me:

How can this woman be allowed to get away with what she does? I sent her lots of money for voodoo dolls and hoodoo spell products, all of it worthless. Took months for me to get this crap also. The dolls are cheap looking. Other stuff just didn`t work but I was desperate when I tried this. She claims to be a "pipe carrier" of a native american tribe that has no pipe carriers. http://www.newagefraud.org/smf/index.php?topic=3857.0  She`s a member of professional organizations that take anybody who will pay the entrance fee (e.g. one organization of "native american" "anthropologists"). Her books are full of stolen or inaccurate info. Next I`m filing a better business bureau report. I suppose in some ways I deserve what I got. What kind of idiot believes in this stuff right? I can be happy even if I have been ripped-off so long as I can help others to avoid her and those associated with her. Oh that is a "madrina angelique" (crossroads mamas is another con site they run).

First of all, if this were a real customer, I would have heard from them and they would use their real name. Legitimate complaints are typically done by people using their real names, especially those who threaten to file BBB reports. This person did neither because they never were a customer and therefore cannot file a BBB report. That in and of itself is proof of THEIR fraudulence. Secondly, anyone who has ever bought a doll of mine knows my art is nothing cheap....they are very well made, very powerful, and full of spirit, so much so they have been used by several TV shows including National Geographic's Taboo, Blue Bloods and Vampire Diaries as well as thousands of satisfied customers over a period of 8 years.

The issue of being a pipe carrier is simply a matter of the person distorting my words to suit their agenda. I am indeed a pipe carrier, but I am also Cherokee. Most tribes have sacred pipes, you imbecil. The title of Pipe Carrier comes from the Lakota religion, the Way of the Sacred Pipe. One of my teachers was Lakota, and I have been to Sundance. I am not Lakota, so I do not call myself a Lakota Pipe Carrier...THAT would be fraudulent. I do admit that folks who are unfamiliar with Native American traditions could easily be confused and so I have clarified the language on my site. However you slice this loaf of bread, there is nothing that this person can say or do to change the fact that I am who I say I am and I have LIVED the life of a native person. Not something someone who dresses up like an Indian on Halloween can ever do or change. It must really irk him to know that I am what he wants to be so his way of dealing with that is to trash my name.

The other place where this issue was raised was at the new age fraud forum. Again, pretty transparent as to who the folks are doing the "reporting". I have written the owner of the forum disputing the report, and like most scam sites, I never got a response. Obviously they don't do their homework. One person there even said I was confused about my Aztec ancestry. Really? No my friend, you are confused.

Next, "her book is full of stolen or inaccurate info". Funny how the trio of my main haters have all accused me of this yet no one has been able to produce a single substantiated example. The reason? There's nothing to the accusation. I have cited my information like a scholar even in my popular books that don't require such stringent citations.  I have given credit where credit is due. Next...

Filing a Better Business report...where is it my dear hater? Well, in order to file a complaint with the BBB you have to have made a purchase somewhere along the line and of course, this person has never made a purchase so they can't file a report.

And the "what kind of person believes in this stuff" comment, need I really address that? Obviously a poor attempt at trying to present themselves as a victim. Anyone who lives a spiritual life believes in something spiritual, even the person who wrote the complaint. Sad they have to resort to such low life tactics in their attempts to get even. Not very spiritual behavior for someone supposedly so spiritual.

And finally, "...help others to avoid her and those associated with her." The mention of Madrina's name is a dead giveaway for who this person is. Stupid fool can't even get the name of our supposed "con" website right. It's not crossroads mamas you idiot, our website is Crossroads Mojo  and our Etsy shop is Crossroads Mojo as well (and we are having a 50% off sale now until December 22, by the way so check it out). Yet another example of acting with a hot head, not doing your research and simply acting out of meanness. This reflects YOUR character, not mine.

Now, the million dollar question I have been asked is, why? Why are these people writing this crap about you? Well, it all started when I kicked him out of my FB group and forum for being disrespectful.  That's it. I never said anything publicly, I never made a big deal out of it. People remove people from groups all the time, but to hold a grudge about it like this and 8 months later still playing this character assassination game? Really?

And a little tidbit of information...let's see how can I put this...well, the title he once held is not longer his because...of the very same arrogant and disrespectful behavior he displayed in my group. Now it must have been really bad to lose your t-t-t-title. That almost never happens. And it all could have been avoided with a simple apology...not to me but to his elders. But when people are more concerned about being right than doing right, well it'll bite them in the ass in the end every time.

Now, how has this dishonest rip off report affected me and my business? Fantastic! I have just signed another contract with Weiser books for my second book with them and I couldn't be happier. ALL of my websites are doing fabulous, I am making more friends with wonderful people on a daily basis, and I have learned who my real, true, close friends really are. My FB group Hoodoo and Conjure Magazine is an incredible group of supportive people...more like family than just a group (if you want to join, pm me on FB and I will add you). My forum boasts more than 1300 people, our student body is growing every day, and I have more trail blazing projects on the horizon that are going to make 2013 even better. A famous author once told me, if they aren't writing negative reviews or hatin' then you aren't doing something right. So thanks, my haters! Because with as much as you hate, I must be doing a whole lot right. 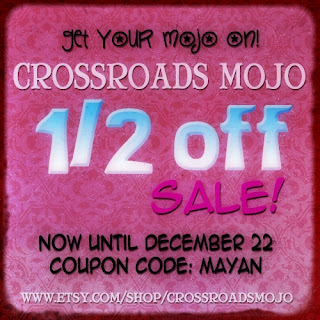 * Article and images are copyright 2012 Denise Alvarado, All rights reserved worldwide.
* Image of demon coming out of the man's mouth from http://www.fantasy-workshop.com/faw/image-files/demon-clip-art-13.png and is in the public domain.


Oh, I almost forgot! I had originally wanted to share some photos of my cute puppies and how to bless your animal friends but then got sidetracked. So, I'll save that for another post. In the meantime, here's one of my favorite pics of Zephyr. Oh, and he does have a Facebook page if you want to head over there and show him some love by liking it;) Zephyr's Facebook page 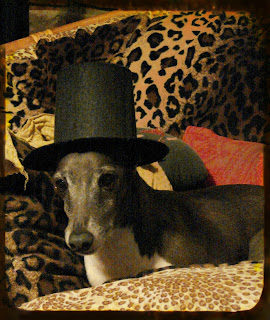