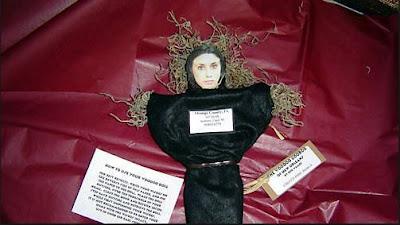 When the whole country first became aware of the murder of little Caylee Anthony, the media latched on to the story like no other. And after the arrest of her mother Casey Anthony on July 16, 2008, people with a macabre perception of  free enterprise clamored to make a buck off of  what panned out to be one of the most notable cases of this century for the murder of a child.

representing Casey and put it on eBay for sale. What that person did with the money, I don't know. In fact, for the longest time I tried to find out who was making these dolls, but never did find out. It certainly got more than the appropriate share of press which I am certain spawned further sales. And of course, others jumped on the bandwagon with their attempt to make a more "palatable" doll in the eyes of the general public when the Caylee Anthony Sunshine Doll was created in 2009. Fortunately, this distasteful product launch was not met with the public's embrace and the Anthony family attorney demanded it to be taken off the shelf, which it ultimately was.

Now, I am getting Google feeds daily about the demand for Casey and Cindy Anthony voodoo dolls. I have even been approached about making these dolls. After all, I have written articles and have several mini sites dedicated to predators and child sexual abuse AND I make Voodoo dolls. But here is a big difference: I make Voodoo dolls and these other folks make voodoo dolls. Furthermore, my websites that are geared towards predators and child abuse are all not for profit with 100% of the proceeds going to the Polly Klass Foundation.

This whole issue of people profiting off of the murder of others spawns many discussions, the least of which is the question of morality. Is it right to profit from other people's pain? This is a complicated question in the world of hoodoo if one is a two headed practitioner. And the answer would be "yes", if we are to be completely honest. People come to practitioners because they are hurting, desperate, tired, and sick and tired of some person, place or situation. We do what we can to help them change it, whatever it is. But, there is a big difference in this kind of profit as opposed to profiting off of the murder of a child, or any murdered person for that matter.

Many folks will say there is no moral code in hoodoo, usually in reference to the concepts of karma and the Wiccan rede that are not part of the African-derived traditions. But I disagree with this. Of course there is a moral code in hoodoo, and it is as individual as the practitioners themselves. We are all guided by our own set of morals, shaped by our upbringings, beliefs, and life experiences. To say otherwise is just ignorant.

Yet, the whole discussion of "hoodoo morals" is, in my opinion,  a good one. All religions and spiritual practices have a set of guidelines governing moral behavior. The idea that in hoodoo or the public concept of voodoo one can do whatever they want because there is not a written or universally determined body that regulates behavior is ludicrous. Typically, this stance is defended because hoodoo is a "magickal system" and the general public has no real understanding of the Voodoo/Vodou religions. If this is true, then why do we always say to perform cleansings after doing such work? Because we aren't worried there will be negative side effects? Because we want to separate our energy from the energy that we have manipulated? Because we don't want to be attached to whatever situation it is we are working? Because we don't want our families and pets to suffer as a result of putting the mojo

on someone? Or all of the above? The World of Spirit has its own set of rules, and if you are going to be a player in that world, you had best be ready to deal with the consequences of your choices within that world.

But is revenge ever justified? And is it ever justified to do Voodoo or hoodoo on a perpetrator? Of course it is. Particularly in cases of child abuse, sexual abuse, rape, and murder of a child it is justified and we have specific spirits that are more than willing to take on these cases upon request. The best discussion I have ever read to date on this issue is in Luisah Teish's book Jambalaya; The Natural Woman's Book of Personal Charms and Practical Rituals.

In that book, Chief Luisah Teish discusses the case of rape and how one might going about seeking revenge in a manner that has the desired outcome in terms of punishing the offender and keeping oneself safe from negative consequences of initiating such revenge. If this book is not a part of your library, whether you are a man or a woman, I highly recommend it.

Casey Anthony and Cindy Anthony Voodoo dolls are wrong and I will not be among those people who make them and sell them on eBay. Not only do I hate eBay, I hate the very idea of profiting off of a child's murder. There is nothing in that scenario that I can see to make it a good idea, unless one is doing it for the express purpose of raising money for an appropriate, related organization with the power to do a lot of good in this world. Otherwise, these folks are creating their own bad mojo. Whether you believe in karma or not, or Newton's Law that states all actions have an opposite and equal reaction, or that the actions of a hoodoo has no consequences, none of us live in a vacuum in this world. We are all connected,and as such, we all effect one another.


If you are outraged by the release of Casey Anthony and want to honor Caylee's memory, and the memory of all murdered children, check out the Polly Klass Foundation as a start. There are many things we can do on a personal and social level to make a difference in the prevention of violence against children and to help in finding missing and exploited children. I have listed a few links below for your convenience.

Finally, there is power in numbers. Whether it is a social cause or spiritual cause, when a group of people focus their energy to a desired end, there is a greater chance of seeing the change you want to see. If you wish to effect change on a spiritual level, work in tandem with the people in your magickal circle towards a specific purpose. Help to send light and protection to the children in the world who need it. Bind the perpetrators. Do whatever you feel is within your power to do. The important thing is to take action. Sitting idly by without doing anything is complacency, and that has its own set of consequences.

Never doubt that a small group of thoughful, committed people can change the world. Indeed, it is the only thing that ever has.
(Margaret Mead 1901-1978)

More than 582 kidnapped children have returned home thanks to Amber Alerts–and caring people like you. Sign up to help find missing children. Click here to receive Amber Alerts on your cell phone.

Our Kit helps parents keep children safer online, and helps you open communcation about the Internet with your children. Click to order your free Internet Safety Kit.

When a child is abducted by a parent or family member, the trauma can leave scars that never heal. Get the facts. Learn more.