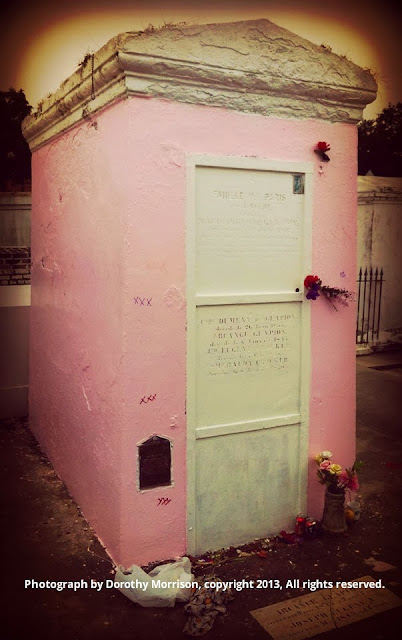 You can just imagine the reaction devotees of our beloved Voodoo Queen of New Orleans, Marie Laveaux, experienced when they read these words by Dorothy Morrison posted on her Facebook wall several days ago: "As grand a time as we're having in New Orleans, we did make a rather disturbing discovery this morning: Someone painted Marie Laveau's tomb...I can hardly bring myself to say this...pastel PINK!!! WTF??? Someone local: Please find out who did this, and make them change it back! It's disgusting, and I don't think Madame is very happy about it." 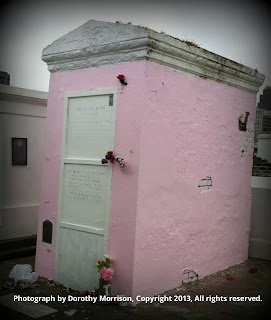 A flurry of responses and reactions ensued and I rather suspect will continue for some time regarding this event.

Alyne Pustanio, author of Purloined Sories and Early Tales of Old New Orleans has this to say about the event: "Whoever painted the tomb probably was doing so at the behest of its owners and that's the color they wanted it to be. That tomb is painted more frequently than possibly any other tomb in the New Orleans area specifically because it is continuously defaced with X's and other markings; tourists, encouraged by "who me?!" tour guides, are the worst offenders. I can understand that pink is not the immediate color that would come to mind for those of you who are used to seeing the tomb whitewashed, but even a Pepto-Bismol pink will weather and fade after the rains of winter and the spring heat are done with it, and it may be this worn patina that the painter is after. I personally know of acts of random vandalism to which the old cemeteries have been subjected in the past, and in my opinion vandals are not going to stick around to paint that big tomb especially when it is easier to desecrate the other old, crumbling graves and paint graffiti on the cemetery walls. So don't worry, the color will fade."

But not everyone is so nonchalant about it or used to seeing this kind of thing. The passion with which devotees feel entitled to inscribe Xs on her tomb is fierce. According to one person, who seems to be misdirecting their anger at Pustanio (who knows more about New Orleans lore and Voodoo history than anyone I know), putting small Xs on her tomb is not defacement. "The tomb belongs to the Girondo family (I think thats the spelling) and if they did request it to be painted, don't you think they would have done it in a more professional manner and not with LATEX and painting the marble..??? are you kidding me? Oh you neglected to read where the remaining paint was dumped into a drain." While I know Pustanio well, and I know she is very aware of the whys and wherefores of the practice, I can understand the anger that this individual feels. My initial reaction was quite similar.

But, we all need to just calm down a minute and not get angry at each other for something none of us did.

On the other side of the coin, there are some...well, at least one...devotee who is pleased with the color choice. Upon learning the news, Oskar "Doc Mojo" Yetzirah exclaimed:  "PINK!? OOOO SHEEET! Madam Laveau just got a Barrio Style touch up!" Apparently, painting graves bright colors is a tradition found in Mexican Catholic cemeteries. According to Yetzirah, "'El Color es un recuerdo de La Vida' is the saying I had heard several times growing up. It means, Color is a reminder of Life."


Reaching out for comments from New Orleans natives during the Christmas season leaves many questions unanswered. However, I was able to get a comment from the Divine Prince Ty Emmeca who, while he does not know who did it, stated in reference to the color: "I assume (it was) someone fighting a Breast Cancer Cause."

But for those who have not been there to see it in person, the energy is not palpable. Morrison states:
"I understand why some of you don't think this is a big deal. But if you could feel the atmosphere there now, you'd know why this is gnawing at me so."

That said, the tomb, while the leftover paint was reportedly tossed in a drain, does seem to be painted with more care than if it were simply an act of random vandalism. The edges are neat, and there is a carefully painted little heart next to the plaque on the ground (see photo below).

This little telltale sign tells me that it is someone local who understands the healing grace with which Mam'zelle bestows on the sick. The color pink is associated with cancer - breast cancer specifically - and so, the Divine Prince's assumption rings true.


Whether it is vandalism or devotion is not the issue here, however. Rather, according to Morrison, it is the fact that it was apparently done without Mam'zelle's consent. At least, that's what Morrison expressed after being there in person and informing Mam'zelle that her tomb had been painted pink. Traditionally in New Orleans Voudou, Marie Laveaux is associated with the color blue, perhaps because of her association with water. Morrison states: "I don't think it's the fact that it's colored paint. Instead, it's the actual color. If it had been painted a lovely rich jewel-tone - emerald green, sapphire blue, deep amethyst, or even garnet - I think she'd be okay with that."

The latest rumor from local informants describes a small, light-skinned black man seen walking around town with pink paint on his pants. Which immediately makes him a suspect...to those who don't care to investigate further.

Many thanks to Dorothy Morrison for bringing this issue to our attention. Sadly, the event hasn't made the news anywhere that I have found, aside from my blogs and article at the New Orleans Voodoo Examiner.


For anyone who wishes to visit the grave site, pay your respects and take photos, the tomb is located in St. Louis Cemetery #1. The tomb is marked “Famille Vve. Paris, née Laveau” and to find it, enter the cemetery at the front gate. Turn left and count between the 5th and 6th tombs on your right and cut in between the gap between the two. Look up at about 11:00 o’clock and there it is!

*Check out Hoodoo and Conjure: New Orleans for a lengthy article on the Wishing Tomb and how to serve Marie Laveaux as a devotee.