In the Company of Black Hawk 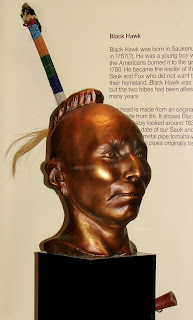 We all know that Black Hawk is an important figure in many spiritualist churches. He is not found in all churches, which is evidence of the independent nature of the various congregations. Typically, it is the spirits that follow the reverend mothers and bishops of the churches that dictate which spirits are emphasized in worship.

The emergence of Black Hawk among spiritualists can be traced to Leafy Anderson, who, according to some reports, was half Mohawk Indian and the assumed founder of the spiritualist church in New Orleans. She is reported to have said Black Hawk was the saint of the south while White Hawk was the saint of the north. I don't remember anything about White Hawk in New Orleans; what I know of him is from an indigenous perspective and from study of the spiritualist church doctrine and manual for reverend mothers.

Though spiritualists will often deny any association with Voodoo or hoodoo, there are a number of similarities and correspondences. The emphatic public dissociation with Voodoo and hoodoo makes sense given the sociopolitical climate in the early twentieth century when African Americans were routinely hassled for their religious beliefs and often imprisoned.

There are a few major spirit guides that are emphasized among spiritualists in New Orleans. Among them are St. Patrick, not surprising given the importance of Damballah Wedo in the New Orleans Voodoo pantheon and the subsequent syncretization of the two. Queen Esther is another major Spirit guide, though she did not take off in popularity like Black Hawk or St. Patrick. This is curious given her worship is focused on the empowerment of women and breaking the confines of socially determined gender roles. The spiritualist church is clearly a female dominated tradition.

Father John is another of the popular spirits of devotion in the Church. It is difficult to determine his origin and it seems to depend on who you talk to. He is affectionately referred to as Cousin John, Father John and some say Father Jones, though it is not clear whether or not Father John and Father Jones are the same spirit. Father John is reputed to be a great doctor and healer and guiding force among the spirits themselves. For this reason, he is often said to be the spirit of Dr. John, the famous gris gris doctor in New Orleans during the time of Marie Laveau. His energy feels consistent with this theory to me.

In addition to these popular spirit guides that appear among spiritualist circles, it is interesting to note that Black Hawk sometimes appears with two other spirits on his altar. This is something that you may not be aware of unless you are from New Orleans and have ever peered into a church yourself. I call them the Holy Trinity of Spiritualism, though not everyone will share this perspective since there is great variation in the spirit guides among churches themselves. However, they appear frequently enough that I believe it is a fitting description.

There is the common depiction of Black Hawk's altar consisting of his statue sitting in a bucket of sand. Yes, this is one way of creating his altar, but is by no means the only way, nor is it the manner in which he is situated in the Spiritualist Churches themselves. The "Black Hawk in a bucket" scenario is often promoted by those with no real ties to the Spiritualist Churches of New Orleans or with New Orleans Voodoo and hoodoo. Alternately, it is a tradition practiced by some elders in the Hoodoo tradition who maintain an altar in this manner in the privacy of their homes. I personally have Black Hawk sitting in a metal galvanized bucket that is filled with a mixture of different earths; some from the land of his birthplace, some from a crossroads, some from a graveyard, etc. The earth blend that he sits on is a very powerful blend that can be used in other works pertaining to him and in starting buckets for others who tutelage under me. Having Black Hawk sit on a blend of earths such as I have described is an old tradition that seems to have been whitewashed in the bucket of sand scenario. 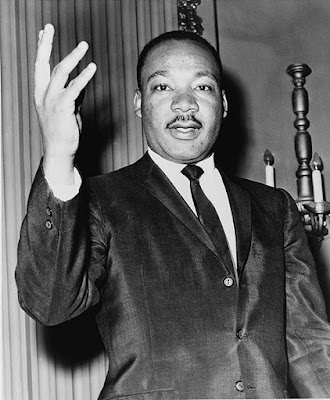 There are many other nuances about Black Hawk that I may eventually share as someone who is an insider looking out as opposed to an outsider looking in. What I want to focus on and stimulate discussion about is his relationship with two other spirits that sometimes appear on his altar in what I call  the Holy Trinity of Spiritualism. These two other Spirit Guides are St. Michael the Archangel and Dr. Martin Luther King.

There are numerous cultural and religious implications with this trinity of spirits, and close examination of the three reveals a lot about the collective psyche of the people who follow this tradition. New Orleans is a wonderful city in many ways but it has an awful, dark history of discrimination and oppression of people of color, particularly Africans and Indians. This fact is one common ground that unites the two populations. From this perspective, it is not surprising to see Black Hawk and Dr. Martin Luther King gracing the same altar.

It is also not surprising to see St. Michael share the same altar. St. Michael is said to be the defender and Guardian of Israel. He also is a protector and defender of an oppressed people. An altar to Black Hawk will many times have one or two statues of St. Michael flanking the statue of Black Hawk with a photograph of Dr. Martin Luther King hanging on the wall behind or standing in a frame behind Black Hawk. 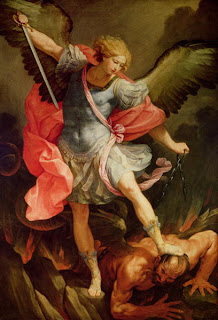 But what do Jewish people have to do with New Orleans, you may ask? Well, the Jews were right up there with Africans in the Code Noir (Black Code) set forth and implemented by King Louis of France, which called for the forced religious conversion of all Africans to Catholicism and the expulsion of Jews from the city. The first three articles of the Code speak for themselves:

Article I. We desire and we expect that the Edict of 23 April 1615 of the late King, our most honored lord and father who remains glorious in our memory, be executed in our islands. This accomplished, we enjoin all of our officers to chase from our islands all the Jews who have established residence there. As with all declared enemies of Christianity, we command them to be gone within three months of the day of issuance of the present [order], at the risk of confiscation of their persons and their goods.

Article II. All slaves that shall be in our islands shall be baptized and instructed in the Roman, Catholic, and Apostolic Faith. We enjoin the inhabitants who shall purchase newly-arrived Negroes to inform the Governor and Intendant of said islands of this fact within no more that eight days, or risk being fined an arbitrary amount. They shall give the necessary orders to have them instructed and baptized within a suitable amount of time.

Article III. We forbid any religion other than the Roman, Catholic, and Apostolic Faith from being practiced in public. We desire that offenders be punished as rebels disobedient of our orders. We forbid any gathering to that end, which we declare to be conventicle, illegal, and seditious, and subject to the same punishment as would be applicable to the masters who permit it or accept it from their slaves.(Édit du Roi, Touchant la Police des Isles de l'Amérique Française (Paris, 1687), 28–58).

Given the eventual syncretization of Catholic saints into the New Orleans Voodoo pantheon, it is logical and clear as to how St. Michael found his way on the altar beside Black Hawk and Dr. Martin Luther King.

Black Hawk is referred to as the "Watchman on the Wall" who will "fight your battles for you". He is the guardian of a combined Indian nation, the Sauc and Fox (together referred to as Meskwaki). St Michael is the Guardian of the nation of Israel and her people, and Dr. Martin Luther king is the champion of the Civil Rights movement and representative of freedom from bondage and great leadership. All three of these spirits convey a message of strength, victory, and militancy.

Painting of St. Michael by Erzengel Michael, circa 1636, p.d.